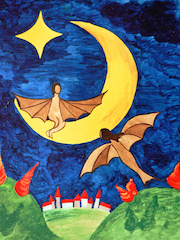 Recently I read an article from a Finnish newspaper (Helsingin sanomat,2014) discussing Erasmus students and their love affairs during the study of their exchange programmes. The article mentions that since 1987 up to 3 million students and 350 thousand teachers have become involved in an Erasmus programme.

Leaving for several months on an external study visit is quite common nowadays. Just to draw a comparison, 150 students visited Finland in the year 1992 but seven thousand students study in Finland nowadays. Statistics shows that 27% of the students who left on a foreign study visit initiated a long term relationship during their time abroad. An EU committee estimates that up to a million babies have been born since 1987 to couples that have met thanks to an Erasmus programme.

Because a person during his or her studies at university may also be looking for a life partner it is not rare that he or she finds that partner during the study visit abroad. So many circumstances can contribute to it. He/she leaves for a foreign university alone and everything in the foreign country is new and dressed in a magic to be experienced and recognised. The climate, culture, language and local customs may be magical also. The activities on the foreign and unknown territory take his or her up-to-now solid life assurances away. He or she partially leaves the automatic way of functioning and becomes more attentive to his or her own feelings and to the surroundings. One spends more time alone and maybe for the first time in his or her life gets in deeper touch with oneself. At the same time he or she might suffer from feelings of isolation, loneliness and absence. The need of a deeper and closer relationship and the chance to share one’s own life story is especially intensive at this time and so the desire for new experiences with someone else grows.

Although one is fully involved in study he or she is torn away their previous way of life without one’s family and social contacts and therefore has plenty of time (and time flows here slower on the subjective level), to devote to many kind of hobbies and social gatherings. The chance to meet someone who enchants us grows with the frequency of social contacts. And many are enchanted by their future life partner. In no time a joyful and enthusiastic period of time arrives during which the couple get to know each other and they share their life experiences. This time is also enriched by the elements of the new culture and language.

Unless the relationship ends up as a momentary flirtation after the end of the study visit and develops despite the physical separation, at the beginning partners build a distance relationship, that has a magic of romantic love. Momentary meetings replace long term separations, emotionally stained by desire and missing of the partner, who is hundreds or thousands kilometres away and still virtually easily accessible. After successful handling of the long distance relationship, when partners look for the way to real life together, they often decide to enter into marriage.

And just like a prince takes his princess with him to his kingdom, one of the partners takes the other to his country. The fairy tales often end in this point. At best we get to know, that the prince and the princess lived together happily ever after. I have not come across a fairy tale that describes the life of the princess in a foreign kingdom. It should not probably be a fairy tale any more.

The more economically advanced country or the country of a person who provides the finance for the family often wins the residence selection procedure. Although it is not a rule the model that a prince takes a princess away to his kingdom still predominates. The partners may also decide for a compromise and to alternate between the two countries, that brings other complications especially after children start school. Or if they choose to live in a third country which is fair to both sides it may be a burden for the couple.

And how are those people, who left their own familiar surroundings, back-round, their place in life, culture, language, family, social group and started to create their own life story in an entirely different place ? What kind of obstacles do they meet on their life journeys ? Have they succeeded to continue their up-to-now smooth functioning life or did they have to start more or less from the beginning ?

Those who left to go to a foreign country often live between two worlds. The world they are so familiar with and in which they feel like a fish in water and the other, new world to which they slowly must get used to. And the more sure they feel in the new world, the more distant the old good familiar world might seem to be as it also changes while they are away.

Binnie Kristal-Andersson (B.Kristal-Andersson,2000) summarized the changes, that life in a foreign country brings and to which a person needs to adapt, in her work about immigrants and refugees. They include: variables in climate, landscape, environment, culture, ethnic/racial differences, religion, language, employment, politics, society, socio-economic conditions, education and the way new country functions.

The adaptation cycle is often complicated and painful. A person compares experiences, especially the lifestyle and values of his own country that he attained during his childhood with the experiences from the new country on a conscious or subconscious level. During the comparison one is often in a highly emotional state of mind, it is difficult to avoid the idealization of one’s own country and criticism of the new country.

According to Kristal-Anderson (2000) during the adaptation cycle a person might have to deal with the following states of being: being a stranger, loneliness, missing, longing, feeling quilty, shame, separation and loss, sorrow, language and value degradation, inferiority, sense of non-identity, rootlessness, bitterness, suspicion, prejudice, and scapegoat syndrome.

How therefore to successfully continue my previous life story in the new country, where I know nobody, I do not belong anywhere, I do not basically have a profession, I could hold on the assumption that I have to learn the language from the entire beginning because a chance to find a job, lets say, in universal English is minimal? After the initial enthusiasm often comes disillusion, self-pity, daily dreaming  “how it would be if”, the feeling of being imprisoned, stuck, frozen, the impossibility of finding a solution, an absence of self-realization and fulfilment. It is not an easy path.

In my opinion, at first the conditions need to be accepted. If I am unable to change them I can try to accept them by myself or by the help of a psychologist. Fighting with the set of circumstances in front of me takes a huge amount of energy and does not bring any constructive ideas or solutions. When I am able to accept the conditions as they are, it is good to consider realistically and objectively the possibilities. The acceptance itself often gives rise to relief and new ideas start to come by themselves.

Familiarity with the local language opens many imaginary doors, doors to social contacts, feelings of autonomy and independence, a sense of belonging, literary and cultural production, and last but not least to fulfilling employment. It is good to define small goals on our path and to feel joy after their achievement.

While trying to learn the language I can for example at the beginning deal with making small purchases, ask for stamps at the post office, ask for directions in the street. It is good to find an intensive language course and add to it self-study, to read the titles of newspapers, to watch simple films with subtitles, to learn from children´s books, from adverts in the metro, to listen to foreign songs and to find out newly recognised words, in other words to involve every information channel. It is useful to speak with mistakes and without fear. On the other hand I would recommend to deal with offices in English where there does not come a feeling of insufficiency when I do not understand or cannot express myself and which easily leads to loss of motivation.

After managing to grasp the language on a conversational level, it is important to speak and listen. Provided that it is still not possible to find a work place I can consider additional education, retraining, or finding an internship programme or even charity help. Achieving mastery of the language will further develop by using it in everyday life. In the case that I am able to find only such a job which does not fulfil my expectations, I should take it as a temporary solution and not give up. I can engage in my hobbies during my free time and look for fulfilment through them. I can find friends with similar life circumstances as mine and we can share our life experiences together and support each other.

The adaptation to a new culture is an individual and unique process for everyone, since everyone comes with entirely different experiences from their own country and immigration may be taking place at a different time of their life. The optimal adaptation ends by integrating one’s native culture with the elements of the new culture. The person´s  original identity is preserved and it is enriched. The person is able to live a satisfying and fulfilling life in the foreign country. The person maintains the bonds to their original country, that he/she visits whenever it is possible. The person passes the culture of their own country in the form of language, cultural heritage – literal and film production, customs and habits to their own children.

Binnie Kristal-Andersson:Psychology of the refugee,the immigrant and their children, Department of Psychology, University of Lund, Sweden 2000